Hello friends! I hope this finds you all well. I have been a bad poster, but I really don’t have too much to report. All is well with me and the baby. I will be 14 weeks tomorrow. I like that number. It feels biggish. I still have a pretty flat stomach and nothing really seeming to go on in there, so it continues to put me at complete disbelief that I am actually having a baby. BUT….. it feels a little more real this week because we let the cat out of the bag. Let me tell you. To those of you still waiting for your big moment, and remember it took me 4 YEARS to get here- telling family and friends is seriously so worth the wait. That was one of the most fun things I have ever done. I think especially after Infertility because basically everyone has given up on you, so you really surprise them! We had really held it in- not even telling our siblings, who are our best friends. Only each set of parents knew. So here is what we did:

After OUR TEAM WON THE SUPERBOWL GO HAWKS GO! A and I called all of our siblings and their spouses one by one. We knew that they would just assume that we were calling and face-timing to recap the game and celebrate with them, so it would be a perfect blindside! So we had them on the line and we were all, “Go Hawks!” And then they’d be all “Yeah! Best game ever! ” and then A would go, “I know it was so awesome and K is having a baby!!!” And the look of shock on their faces was priceless. We actually only got to face-time with 2 couples and talk with 2. Face-time was so fun though, to actually see people processing- like, “huh, how? wait whaaaaaaaaa..” Haha, so great. A’s brother was pumped, his wife had a “oh boy” look on her face. Almost like she was disappointed, but I know she was just processing. They still haven’t even started trying, so I think A’s brother is going to start feeling left out and put the pressure on her. A’s little brother was super excited and A’s sister started to cry. This is the pretty one who is my best friend who is nicer to me than I am to her who had the baby in mid-Nov and is already a size 2 again. She is amazing. My brother’s voice went up about 10 octaves as he laughed and said “WHAT? ALRIGHT!!!!” and his wife started sobbing. Ahhh, it was so good. I will always remember that day. So worth a lot of the pain. Not all of it, but really, really worth some of it.

In the days that proceeded, we shared with closer friends. Some were calls and some were texts. All the girls responses were the same “OMG I’m crying!” and if they had been pregnant before, their first question was always ‘how are you feeling?” like seriously, every time it was the same. I went through A’s texts to see some of his responses and it was such a funny Sociological experiment in a way. His text to them. literally. “Bun in Oven. Headed home.” That’s it! meanwhile I was all, “Hey ____! Guess what!? I’m pregnant! Can you believe it? Due in August! We are so excited! Can’t wait to get home and reconnect with youuuuu!!!!!……” A was to the point. “Bun in Oven. headed home.” And the guy responses? “No Shit! congrats” “Oh shit! congrats” “Holy Crap! for real? congrats!” and if they had been daddies it was “Awesome, man! You’re gonna love it! How is Kimmy feeling?”

So interesting I thought!

Okay, so the MEDS. I have extra stim meds that I wont be needing. I want to get them to someone who will use them before they expire, but I don’t want to get arrested for selling them on the black market. I am watching Orange is the New Black and I look and act like Piper Chapman, so I know what I’d be in for and it WON’T BE PRETTY. I don’t want a wife who pees on my floor when she’s mad at me I JUST DON’T!

This is what I have:

2mg tabs of generic Estrace (Estradiol)- I would count them, but I don’t want to touch them. I am guessing there are at least 30 in there- discard after 12/22/14

I also have a Clearblue digital ovulation 7- test kit unopened. see pic. Technically it expired in Jan. well shit. I will just give that away.

Listen, we were so lucky to have most of these meds covered through relatively small co-pays through our insurance. I so want to pay it forward to someone and sell them for what we paid. Maybe add a little for shipping. Do you know how I can safely go about doing this? If you or anyone you know will be stimming with the same protocol, please leave me a comment with an email address and I can email you directly about how to move forward. I am guessing Paypal? I haven’t actually priced it all out yet, but give me a bit and I will have that figured out. It will be dirt cheap compared to out of pocket I will tell you that. I guess it depends on how much of it all you want. It will be less than $500 for sure Seriously, we got so lucky. 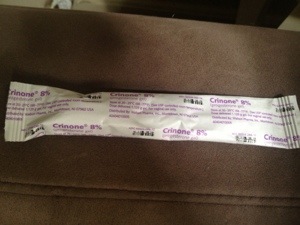